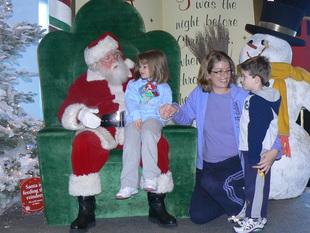 "I will honor Christmas in my heart, and try to keep it all the year."
~ Charles Dickens


"Thank you so much for the lovely picture of you and my son Ben.  It was so kind of you.  It was refreshing to see you in such an intimate setting.  Ben was too scared to see a mall Santa. You've made our Christmas truly special. Merry Christmas and a Joyous New Year." Heather, Michel and Ben.


"Dear Santa Michael: Thank you so much for the picture of Sawyer.  We were so pleased he sat with you, as mommy and daddy (our daughter and son-in-law) had no such luck on their visit.  You are a wonderful representative of the Christmas spirit.  Thanks again for being a Super-Santa!  Merry Christmas." Susan Meeker.


"Wow!! There really is a Santa Claus.  The effort you have gone to has renewed my faith in the Christmas spirit.  Who says that nobody does something for nothing anymore?  With gratitude and respect." Monica Munn.

"We adore your Santa character and would really like to have you be a part of the Christmas at Canada Place program again. You are truly the best Santa." Vanessa Franjkovic

I received a priceless gift from Santa this morning when I popped into Brentwood Centre to pick up some boots from the shoemaker!  From the upper level I could look down to where Santa was greeting the children.  My heart was surely touched as I observed him greet each child with such care and love, from the infant to the reserved, likely eight year old boy, not sure whether or not to believe.  It was truly enchanting!   Santa sat the latter to his left and appeared to have a serious chat with the boy, who visibly softened and began to show some light in his face.  I noticed Santa hesitated in giving back the infant girl he held on his lap and the little serious chat he had with the mother in the process of handing the baby over. I believe.......   Allison

Michael is the BEST Santa Claus with whom I have ever been associated. He attended several client parties for me at my real estate Christmas parties in Victoria, and always drew a large appreciative crowd...not only from young children but from their parents and adults as well. He has an innate understanding of people and it translates into incredible connections within seconds of meeting. He has made a commitment to be Santa Claus and he lives and breathes it all year in his work and his life! I witnessed him in a Seniors Home where he visited his own Aunt and then spent an hour visiting with and making Christmas for every person in the dining room. He has an incredible gift and he loves to share it.
Donna Curtis Realtor Partner L&P Real Estate Group at REMAX

ParentsOnTheDrive: Just wanted to let you know went to Brentwood Mall again this year for our photo with Santa and again the Christmas old elf was perfection with twinkly blue eyes and a beautiful real white Christmas beard. Even my 7 year old was convinced. Barbara Broughton