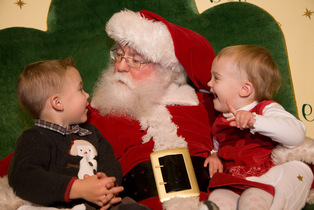 "There's nothing sadder in this world than to awake Christmas morning and not be a child."  ~Erma Bombeck


Santa receives a gift from every child that takes a few moments to talk to him, a gift that is both precious and priceless.  In truth, Santa often receives more than he gives and the utter joy of it is the more he gives, the more he receives.

Not everyone realizes this but as the years go by, I have built up memories that warm my heart throughout the year just as I help the little ones who come to see me develop their own magical memories.

Not all questions are easy to answer but out of the mouths of babes here are a few priceless moments spent with Santa Claus.

“All I want is a necklace for my mommy” little five year old Wade said when he sat up on my lap.  “Santa likes to hear little boys thinking about their mom’s before themselves,” I said. “I can’t promise but I’ll see what I can do. But isn’t there anything you’d like for yourself?” I asked.  “I have lots of toys” Wade said, “All I want is a necklace for my mommy.” I’ve thought about little Wade over these days leading up to Christmas and how he, at five years old has already discovered the real meaning of Christmas.  I pray he gets his wish and with a well place word in the ear of one of my elves, he just might.

Isaiah sat on my lap today, four years old and light as a feather. I asked him what he’d like for Christmas.  He looked up at me with big dark brown eyes and said, “I don’t ever want to have another chemo again.” I had to fight back a tear thinking of this little four year old having to go through chemotherapy treatments.  Now I know this world isn’t fair, but no four year old should have to go through chemotherapy treatments.  I reminded him that Santa was just a toymaker and some things I just couldn't make in a toyshop but I told him the elves and I would say a prayer that he got his wish. That night on Facebook, I solicited the help of my friends and we all prayed that Isaiah would get his Christmas wish.

A little girl of about six came up to sit on my lap and when I asked her what she wanted for Christmas, she pulled out an letter sized piece of paper with her requests numbered neatly from one to thirty-five. I was just about to remind her that Santa has lots of boys and girls to deliver presents to and I couldn’t possibly get her all the gifts on her list but I paused to scan the list before I said anything and I was glad that I did.  She wanted a hug from her dad, a kiss each from her auntie and uncle, she wanted her mommy home for Christmas, she wanted all her friends to get what they wanted for Christmas... Of all the 35 items on her list, there were really only 3 “things” she was asking for from Santa.  Here was a little girl who could remind us all that Christmas is really all about unconditional love.

A five year old named Casey, when I asked him what he wanted for Christmas, looked up at me and said, “I want you to give my daddy a job.”  When I asked what made him think that his dad would want to work with Santa, he said,  “I heard him tell mommy that he’d go to the North Pole if someone would give him a job.”  I looked into those five year old eyes that believed Santa could do anything and wished it were really true.

A family of eight children showed up today ranging from twenty-three down to eight and I commented on how pleased Santa was to have his picture taken with the entire family.  The oldest one told me that they had come to get a Christmas photo for their mom.  He said that his mom had mentioned how sad it was that even her youngest was now too old to believe in Santa. So all the brothers and sisters had got together to get a photo with Santa to show their mom that they still believed, a little differently than when they were young, but still believed in Santa. I knew that somewhere this year, there was a mom who was going to get a real surprise.